Tomorrow I get a prosthetic.  A strange fake thing that is suppose to look real, feel real, make me look normal. I hate it already and I don’t even have it.  I want to hurl it as far as my lame girl throw is able.  I want to see if the damn thing skips on water.  Can it knock a branch clean off a sturdy tree?  I want to know if it can smash a window, a lot of windows.  Maybe go through one window at the back of the house and keep right on going until it flies through the window at the other end of the house.  Fling the thing far away until it takes to orbiting the planet with the rest of the space junk.

Plastic nauseates me.  When girls grow up, we seem all very much alike until we mature a bit… and eventually part ways over plastic.

Some girls to the land of stuffed bras, fake nails, 6” heels, pasted lashes, hair spray stiff. The rest of us might try awhile to improve ourselves with the many aids, but finally hate the confinement so much we give in to the realization that we are one of the plain girls that’ll have to do.

I know folks with a missing foot or arm are thankful for the prosthetic that enables them to be who they are, and move about, but how does a fake breast help me at all?  I can’t wear it swimming.  I’ve read stories of those out for a swim seeing the embarrassing thing float by. Can’t run with it.  Can’t sleep better with it.  Just a spiteful reminder of what’s gone each time I put it on and take it off.

But tomorrow I get the prosthetic.  I can’t stop the flood of tears that surprise me.  My gut aches with the sobbing.  I’m so angry.  I can’t sop up the mess fast as it comes.  Strange, but deep down I feel like getting this fake breast tomorrow seals the deal.  Like it’s an agreement with the insurance agency that I’ll have my breast taken off and kept off permanently.

So that’s it.  Every personal medical crisis I’ve experienced in my life has been resolved over time.  Never before have I had a medical loss for good.

Not just the loss of my breast, forever gone, but the loss of how I do life.  Carefree and wind blown in my own comfortable skin. 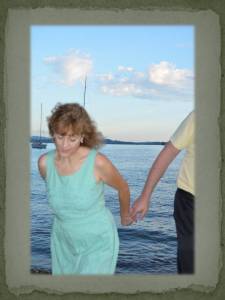 I’ll wear a prosthetic for the sake of everybody else.  People have the right to go out and about and not run into a one breasted woman.  I guess it’s final.  I do need one. Dresses will never fit right, nor coats nor bras without.  It’s not a replacement of what once was part of me.  It’s clothing filler.  That’s all.  And besides, it just might do on a dull afternoon as a discus.

View all posts by Amelia Ponder